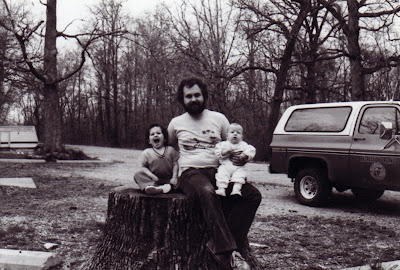 I love this picture of me, my dad, and my sister. I had a very noisy toy called the Big Mouth Singers when I was small, and I am pretty sure I am emulating it here. My sister is emulating a spud. My dad - well, he's just his own cool self. He's been that way his whole life - in high school, the kids called him Ziggy, as in Ziggy Stardust. When he got a little older and was working guiding canoe tours for inner city kids, those kids called him Steve Austin. This innate coolness was not enough for me, however. When I was little, I used to tell everyone that a family friend named Tim McKenzie was my father. It made for fun explanations from my parents.

Before I knew better, I assumed everyone's dad played in bands, raised bees, drove a park truck, and could name all of the trees in a forest (I still think everyone's dad should be able to do that). I thought all dads listened to everything from Ry Cooder to Thelonius Monk to the Pretenders and could tell you engrossing stories about Gram Parsons being buried in the desert and Stephen Stills and Bonnie Bramlett righteously punching out Elvis Costello. I figured it was no uncommon thing to have a father who took you for midnight hikes in the woods, taught you to walk without making a sound, and told you beautiful stories about the starry night sky.

I think I was about eight when I realized the truth - not only was my dad one of a kind, he was freaking cool. I'm still trying to live up to the legacy. 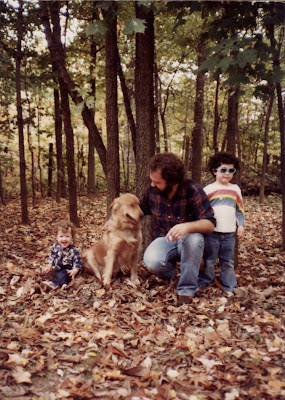 (My attempts at cool started early. That's me on the far right.)

Labels: dads, great steves
Newer Post Older Post Home
What sort of diary should I like mine to be? Something loose-knit and yet not slovenly, so elastic that it will embrace anything, solemn, slight or beautiful, that comes into my mind. I should like it to resemble some deep old desk or capacious hold-all, in which one flings a mass of odds and ends without looking them through. I should like to come back, after a year or two, and find that the collection had sorted itself and refined itself and coalesced, as such deposits so mysteriously do, into a mould, transparent enough to reflect the light of our life, and yet steady, tranquil compounds with the aloofness of a work of art. The main requisite, I think, on reading my old volumes, is not to play the part of a censor, but to write as the mood comes or of anything whatever; since I was curious to find how I went for things put in haphazard, and found the significance to lie where I never saw it at the time.