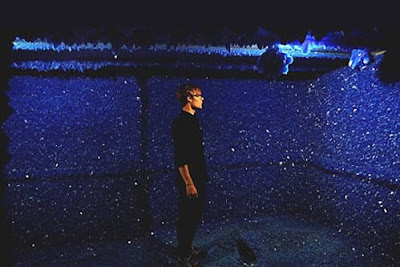 An excerpt of his statement at ArtForum:

Once we found the location, the production itself was conceptual: I wanted to introduce a material that was anathema to the building itself. Crystallization is always, for me, a kind of claiming—I say “claiming” because the process is so amplified here as to be a kind of obfuscation of the building. I’ve encouraged an alien aesthetic, one quite contrary to its vaguely modernist history (with its roots in Le Corbusier’s designs). The building has a certain sort of governing rationality; by introducing these crystals, I’ve introduced some irrationality. The process also allows me to remove myself from the equation; crystallization is an autogenesis, and its results are an auto-aesthetic. I get to become an objective viewer of my own processes, at least to the extent possible. It’s a psychological position to take, to try and obsolete myself within my own realm of activity.

Photo by Sarah Lee/The Guardian. Spotted at It's Nice That.

Labels: art, installations, roger hiorns
Newer Post Older Post Home
What sort of diary should I like mine to be? Something loose-knit and yet not slovenly, so elastic that it will embrace anything, solemn, slight or beautiful, that comes into my mind. I should like it to resemble some deep old desk or capacious hold-all, in which one flings a mass of odds and ends without looking them through. I should like to come back, after a year or two, and find that the collection had sorted itself and refined itself and coalesced, as such deposits so mysteriously do, into a mould, transparent enough to reflect the light of our life, and yet steady, tranquil compounds with the aloofness of a work of art. The main requisite, I think, on reading my old volumes, is not to play the part of a censor, but to write as the mood comes or of anything whatever; since I was curious to find how I went for things put in haphazard, and found the significance to lie where I never saw it at the time.