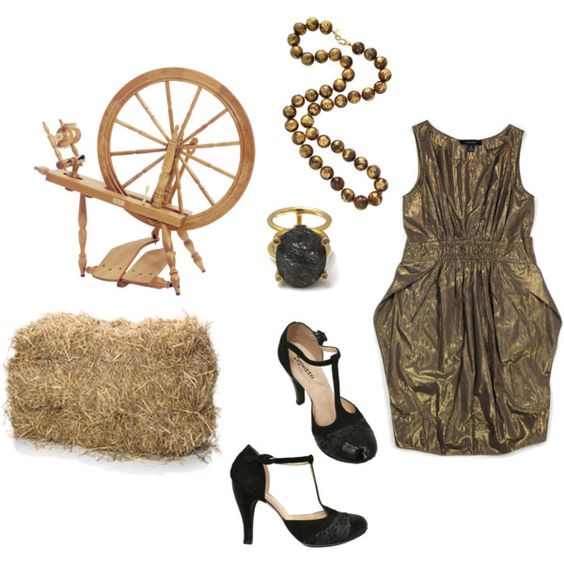 It is easy to dislike the miller's daughter.

The pawn of a boastful, lying father and a greedy king, she can only cry when she faces her impossible fate: the spinning wheel and the straw. She's rescued by the miraculous appearance of a strange little man who truly can spin straw into gold. She pays him first with a necklace and then with a ring, and finally the terrible promise of her firstborn. I might feel pity for her there, on that third night stripped of anything tangible to barter, but her promise is cavalier. She trusts she'll be able to get out of it when she has to, and indeed she does. Later, married to the king, she has a baby, and when the little man comes to claim it, she cries again and he pities her, telling her that he will give her three days to discover his name and release herself from the promise. She sends out spies to find the little man's name while she waits in her palace. One of them stumbles across it and reports it to the queen. When she triumphantly tells the little man that his name is Rumpelstiltskin, he becomes so enraged he tears himself in two. The miller's daughter gets everything she wants in the end - the credit for the gold, marriage to the king, her baby - and pays only with tears.

It's a strange plot, even as fairy tales go. In a weird way it reminds me of blogging, only bloggers get to be Rumpelstiltskin and the miller's daughter simultaneously. Strange people taking the commonest matter and applying their own personal alchemy to it, turning it into something remarkable. Making it all look very easy, unpaid for.

The best blogs create windows into worlds - they let you feel close to the beautiful and strange, and they look effortless. They make you feel that the secret of making a particular beauty - of turning the straw into gold - is there, graspable. Of course, it isn't. The straw in hand remains straw.  You are on your own when it comes to making gold.

Labels: imaginary outfit, rumpelstiltskin
Newer Post Older Post Home
What sort of diary should I like mine to be? Something loose-knit and yet not slovenly, so elastic that it will embrace anything, solemn, slight or beautiful, that comes into my mind. I should like it to resemble some deep old desk or capacious hold-all, in which one flings a mass of odds and ends without looking them through. I should like to come back, after a year or two, and find that the collection had sorted itself and refined itself and coalesced, as such deposits so mysteriously do, into a mould, transparent enough to reflect the light of our life, and yet steady, tranquil compounds with the aloofness of a work of art. The main requisite, I think, on reading my old volumes, is not to play the part of a censor, but to write as the mood comes or of anything whatever; since I was curious to find how I went for things put in haphazard, and found the significance to lie where I never saw it at the time.