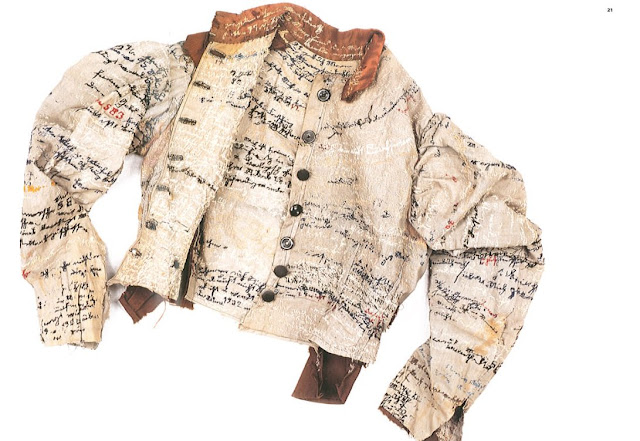 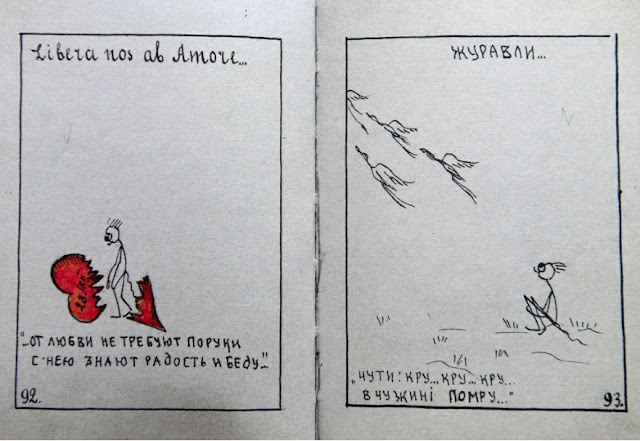 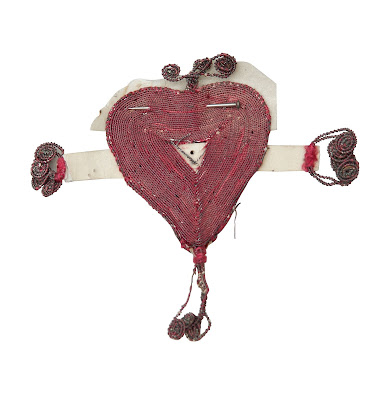 1. Agnes Richter's jacket, in the collection of the Prinzhorn Collection at the Universitaetsklinik Heidelberg, discovered via #WOMENSART.

Richter, a seamstress, was confined to an Austrian asylum in the 1800s. She made the jacket from the materials available there, and embroidered it with her story. Per Wikipedia, '[f]ragments of text from Richter's jacket have been deciphered though their significance and meaning remains unclear (e.g., I am not big, I wish to read, I plunge headlong into disaster).' I wasn't able to find anything online that felt reliable and human (save me from anyone who finds phallic significance in the act of sewing) but this paper mentions that Richter made sure her patient number appeared on the garment, so that it could be traced to her. It also has sweatmarks, so presumably she wore it.

This blog post connects it to a contemporary piece made by Rosalind Wyatt using an 18th century silk bodice and text from 19th century love letters from her husband's family, who were active at that time as reformers advocating for the humane treatment of the mentally ill.

2. A page from Olga Ranitskaya's diary. The left-hand title is in Latin, and reads “Free us from love.' Photo by James Hill for The New York Times.

Ranitskaya was arrested in Stalin's Great Purge of 1937, falsely accused of spying for Poland. She drew cartoons of a character called the "Little Weather Devil" that obliquely recorded her experience of being imprisoned in the gulag; it's believed to be the only diary kept inside the camps to survive (if she'd been caught, she could have been executed). The New York Times ran a piece on the story of how the diary was preserved, how Ranitskaya was identified after years of research, and the outline of the sorrows that shaped her life.

3. Textile heart left with a foundling as a memento, mid-eighteenth century, in the collection of The Foundling Museum, London.

... a small heart, carefully woven in red thread ... one of the tokens left by mothers who handed their children over to the Foundling Hospital in the mid-eighteenth century: a swatch of material, a coin, a piece of jewelry—mementos to identify a foundling if relatives changed their mind. Originally these objects were attached to the admission papers, but in the mid-nineteenth century the Secretary, John Brownlow, removed them to put them on display and raise funds, thus separating the token from the child. Painstaking research has linked many together again, but the baby whose mother left the little heart has never been identified—just a child without a name.

Labels: agnes richter, embroidery, foundlings, hearts, olga ranitskaya, russia
Newer Post Older Post Home
What sort of diary should I like mine to be? Something loose-knit and yet not slovenly, so elastic that it will embrace anything, solemn, slight or beautiful, that comes into my mind. I should like it to resemble some deep old desk or capacious hold-all, in which one flings a mass of odds and ends without looking them through. I should like to come back, after a year or two, and find that the collection had sorted itself and refined itself and coalesced, as such deposits so mysteriously do, into a mould, transparent enough to reflect the light of our life, and yet steady, tranquil compounds with the aloofness of a work of art. The main requisite, I think, on reading my old volumes, is not to play the part of a censor, but to write as the mood comes or of anything whatever; since I was curious to find how I went for things put in haphazard, and found the significance to lie where I never saw it at the time.