'but courage, father! let us out to sea' 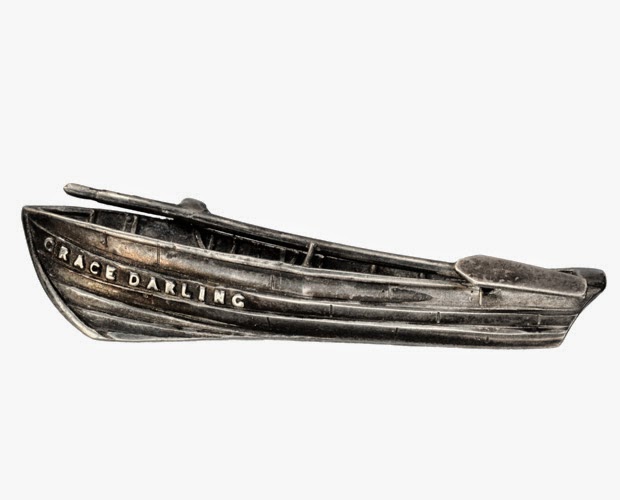 Filed under feats of father/daughter derring-do: on the morning of September 7, 1838, Grace Darling, the daughter of a lighthouse keeper, noticed survivors from the shipwrecked Forfarshire on the rocky island of Big Harcar. The seas were too rough for the local lifeboat, so Grace and her father put out to sea in a small boat and rowed close to a mile through the stormy water to rescue five people.

Grace became a Victorian media sensation, celebrated in paintings and all sorts of memorabilia (including this silver pin), as well as a poem by William Wordsworth:

All night the storm had raged, nor ceased, nor paused,
When, as day broke, the Maid, through misty air,
Espies far off a Wreck, amid the surf,
Beating on one of those disastrous isles—
Half of a Vessel, half—no more; the rest
Had vanished, swallowed up with all that there
Had for the common safety striven in vain,
Or thither thronged for refuge. With quick glance
Daughter and Sire through optic-glass discern,
Clinging about the remnant of this Ship,
Creatures—how precious in the Maiden's sight!
For whom, belike, the old Man grieves still more
Than for their fellow-sufferers engulfed
Where every parting agony is hushed,
And hope and fear mix not in further strife.
"But courage, Father! let us out to sea—
A few may yet be saved." The Daughter's words,
Her earnest tone, and look beaming with faith,
Dispel the Father's doubts: nor do they lack
The noble-minded Mother's helping hand
To launch the boat; and with her blessing cheered,
And inwardly sustained by silent prayer,
Together they put forth, Father and Child!
Each grasps an oar, and struggling on they go—
Rivals in effort; and, alike intent
Here to elude and there surmount, they watch
The billows lengthening, mutually crossed
And shattered, and re-gathering their might;
As if the tumult, by the Almighty's will
Were, in the conscious sea, roused and prolonged
That woman's fortitude—so tried, so proved—
May brighten more and more!

Labels: amazing feats of derring do, boats, dads, england, erie basin, grace darling, jewels
Newer Post Older Post Home
What sort of diary should I like mine to be? Something loose-knit and yet not slovenly, so elastic that it will embrace anything, solemn, slight or beautiful, that comes into my mind. I should like it to resemble some deep old desk or capacious hold-all, in which one flings a mass of odds and ends without looking them through. I should like to come back, after a year or two, and find that the collection had sorted itself and refined itself and coalesced, as such deposits so mysteriously do, into a mould, transparent enough to reflect the light of our life, and yet steady, tranquil compounds with the aloofness of a work of art. The main requisite, I think, on reading my old volumes, is not to play the part of a censor, but to write as the mood comes or of anything whatever; since I was curious to find how I went for things put in haphazard, and found the significance to lie where I never saw it at the time.