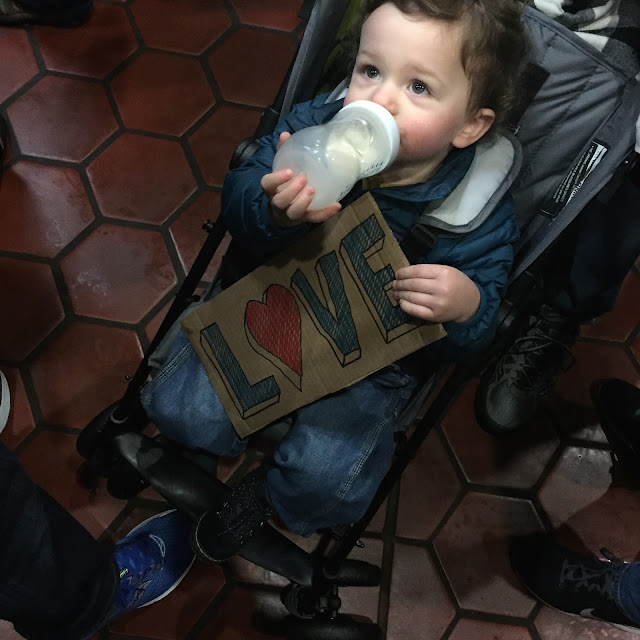 Saturday Women's March was exhilarating. I marched in Washington, DC with my husband and son, my sister and her husband, a dear friend from high school and two friends of hers, and I had many friends in the crowd that I never managed to see or connect with — there were simply too many people. Our phones lost service, so we marveled at the mass of people around us, unaware of what exactly was happening — that women were marching everywhere, filling the streets of LA and Boston and Chicago, walking through snow and rain, marching all over the world. We heard rumors in the crowd that other cities were turning out, but had no idea until we got back to my sister's apartment and turned on the TV just how massive the day was.

And then came Sunday, and alternative facts, and a week of appalling executive orders.
I am sitting down tonight, with Hugh asleep, and Sean on the couch beside me, to write this — mostly for myself, but maybe for you, too, if you need it: chin up.


Aboard his flagship, the Bonhomme Richard, Jones led his small squadron in the capture of seven merchantmen off of the Scottish coast. On September 23, 1779, Jones fought one of the bloodiest engagements in naval history. Jones struggled with the 44-gun Royal Navy frigate Serapis, and although his own vessel was burning and sinking, Jones would not accept the British demand for surrender, replying, “I have not yet begun to fight.” More than three hours later, Serapis surrendered and Jones took command.

This week, I have felt like Jo March, wishing I could run away and somehow join the fight (or at least the Twitter fight). But much of the real work to be done is at home — in neighborhoods, like mine, where people see the world in wildly different ways. So this weekend, we are working on building our community by inviting people over for waffles and a political postcard-writing session (if you are in NE Ohio and enjoy waffles and/or civic action, email me: evencleveland (at) gmail dot com).

I'm also thinking about forming a group that would meet once a month to learn about an issue in depth at the state and local level (again, email me if you are interested). I'd like to try and bring in an expert or a speaker for each meeting, or maybe each person could take a turn doing research into a particular theme and come back to report to the group.

They may be burning the ship, but we can still fight (even — or especially — with cardboard signs and waffles and postcards and phone calls and wonky civic groups).

Some other things:
A march for science: 'Who can participate: Anyone who values empirical science. That's it. That's the only requirement.'
Leading, following and habits.
A comment thread full of resources - 'Mike Pence means it ... Call like you would floss.'
This poster, and this Twitter account.
SaveSave

Labels: hugh, in the news, photos, the body politic
Newer Post Older Post Home
What sort of diary should I like mine to be? Something loose-knit and yet not slovenly, so elastic that it will embrace anything, solemn, slight or beautiful, that comes into my mind. I should like it to resemble some deep old desk or capacious hold-all, in which one flings a mass of odds and ends without looking them through. I should like to come back, after a year or two, and find that the collection had sorted itself and refined itself and coalesced, as such deposits so mysteriously do, into a mould, transparent enough to reflect the light of our life, and yet steady, tranquil compounds with the aloofness of a work of art. The main requisite, I think, on reading my old volumes, is not to play the part of a censor, but to write as the mood comes or of anything whatever; since I was curious to find how I went for things put in haphazard, and found the significance to lie where I never saw it at the time.