Yesterday, angry and upset at the passage of draconian abortion laws in Ohio, Georgia, and Alabama, I posted a list of questions about the "pro-life" movement on my Instagram stories. Here they are, with some additions that have occurred to me since. 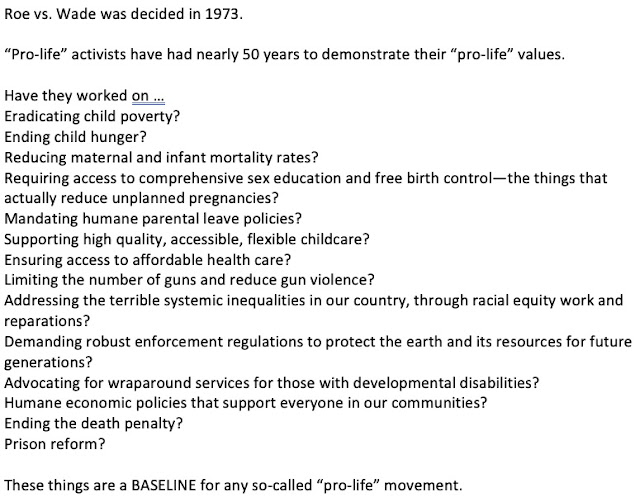 I thought it might be useful to look at just one issue—a noncontroversial one, child poverty, because who wants kids to be poor?—to see how these allegedly "pro-life" states are doing at creating a "pro-life" culture.

So, how are the children living in these states faring? Per the Children's Defense Fund, in the United States:


Nearly 1 in 5 children—12.8 million in total—were poor in 2017. Over 45 percent of these children lived in extreme poverty at less than half the poverty level. Nearly 70 percent of poor children were children of color. About 1 in 3 American Indian/Alaska Native children and more than 1 in 4 Black and Hispanic children were poor, compared with 1 in 9 White children. The youngest children are most likely to be poor, with 1 in 5 children under 5 living in poverty during the years of rapid brain development.


All three states have the dubious distinction of being leaders in the number of children under six living in extreme poverty—defined as "an annual income of less than half of the poverty level or $12,642 a year, $1,053 a month, $243 a week or $35 a day for the average family of four." 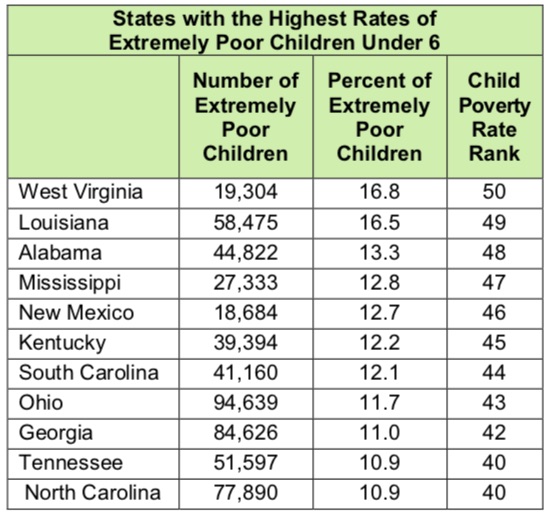 These states are also among the worst when it comes to infant mortality statistic, per the CDC. 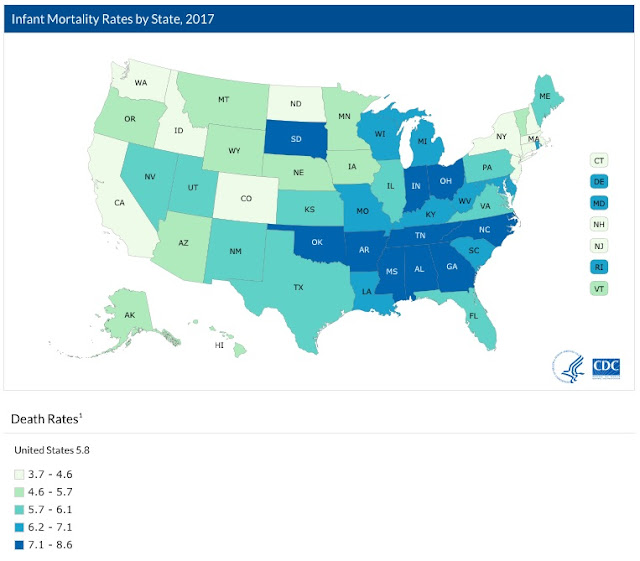 It's hard to square these statistics with a so-called "culture of life."I live in Ohio and I can tell you that it is not a "pro-life" state, and it is certainly not pro-child. Beyond the 500,000 children living in poverty, the public schools are poorly funded (the public school funding system has been unconstitutional for 22 years). In Cleveland, thousands of children are suffering from lead poisoning while lawmakers in Columbus offer zero help or support (they have found the time to pass anti-woman legislation and fund all the legal challenges that will follow). Guns are everywhere. Ohioans are dying of opiods and social services are struggling to support the children left behind. I could go on; the examples are many.

As someone who cares about supporting human lives and believes that women having choice is the only way to create a true pro-life culture, the hypocrisy is appalling. But that's because these laws have nothing to do with a "culture of life" and everything to do with regulating women's bodies and behavior—"about imposing a moral judgment on women for having sex." Infuriating is too mild a word to describe my feelings.

My friend Lisa Butterworth, who has been a feminist inspiration for me for many years, posted this about ways to take action: 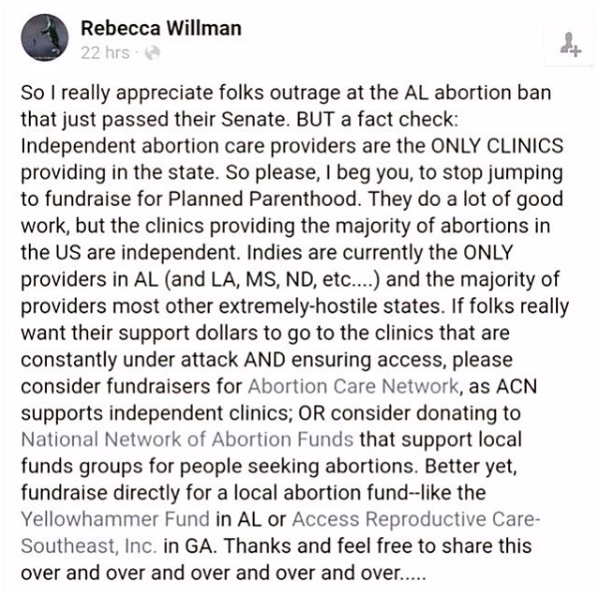 *
It's horrible that so many women are having to share traumatic personal stories and open themselves up to harassment to try and reach the hard hearts and thick heads of abortion opponents. But lives are at stake.


To understand Win’s story—what had happened to her, what she had done, and why—my daughter would need a number of moral and biological concepts that were not yet in place in her young mind. Still, I wanted to offer her a simplified version of the truth that could remain stable for her as she got older. I wanted to assure her that, even though this was a story she needed to grow into, she should always feel free to ask questions, and that I would answer as honestly as I could. And I wanted to break my family’s long-standing silence surrounding Win’s death, because silence only helps to perpetuate the fallacy that outlawing abortion has ever stopped women from attempting it.

If I couldn’t immediately explain to my daughter how Win died, I decided, I could at least explain why. “She needed help really badly and no one would help her so she died,” I told her. Then I added a reassurance that I’m not sure I’d feel confident offering today. “It’s not a thing that would happen to us now,” I said. “If we ever needed that kind of help, we would get it and we would be safe.”

Labels: abortion, in the news
Newer Post Older Post Home
What sort of diary should I like mine to be? Something loose-knit and yet not slovenly, so elastic that it will embrace anything, solemn, slight or beautiful, that comes into my mind. I should like it to resemble some deep old desk or capacious hold-all, in which one flings a mass of odds and ends without looking them through. I should like to come back, after a year or two, and find that the collection had sorted itself and refined itself and coalesced, as such deposits so mysteriously do, into a mould, transparent enough to reflect the light of our life, and yet steady, tranquil compounds with the aloofness of a work of art. The main requisite, I think, on reading my old volumes, is not to play the part of a censor, but to write as the mood comes or of anything whatever; since I was curious to find how I went for things put in haphazard, and found the significance to lie where I never saw it at the time.